Can I Get the Best Job?

I just thank my father and mother, my lucky stars, that I had the advantage of an education in the humanities.

Some degrees typically lead to higher than average salaries and lower than average unemployment rates.  If, for example, majors in engineering or business typically perform well on these measures, wouldn't those majors be the wisest to pursue?  If you like those fields and are good at them, the answer may well be yes.  (But we hope you’ll take a course or a minor with us.)

But what if you don’t like studying those fields, or are not good at them?  What if you really like a major in the humanities or social sciences?  Then we think you should pursue that major not just because you like them, but also because doing so may well make you more successful.

Here's why: the numbers we’ve been looking at are averages.  A successful English major will make more than an unsuccessful accountant.  In fact, the range of differences within career outcomes for majors far exceeds the differences in the average salaries among majors.  For example, according to one study that focuses on earnings range within majors as well as earnings differences among them, the lifetime earnings of philosophy and religious studies majors in the 55th percentile is 1.09 million.  For business and marketing majors it is 1.37 million, a lifetime difference of $280,000.  But the lifetime earnings for business and marketing majors in the 40th percentile was 1.08 million, $10,000 less over the lifetime than the philosophy and religious studies major in the 55th percentile.  In other words, it’s better to be a more successful religious studies and philosophy major, than a less successful business and marketing major.

And since we’re talking lifetimes.  How much is a lifetime of doing work that you enjoy worth to you? 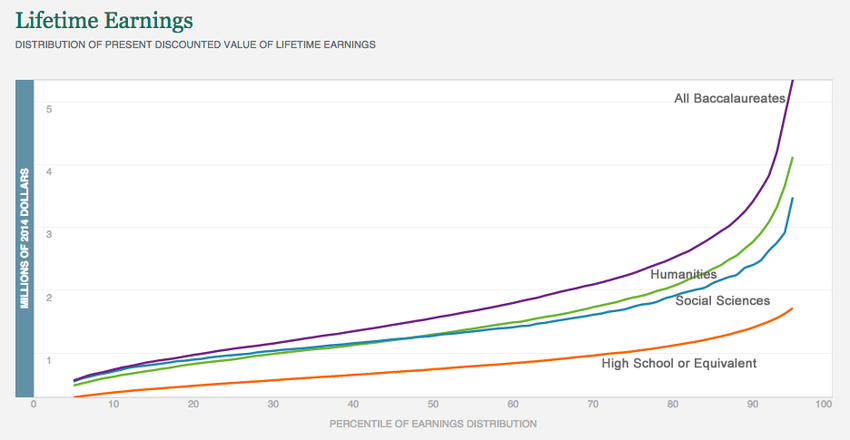 I just thank my father and mother, my lucky stars, that I had the advantage of an education in the humanities.